In case you missed it, kindly go through that article first (https://www.afdex.com/archive/blog/18) to get the introductory details. In this continuation article, the effect of friction formulation on three processes namely, ring gear forging simulation, cold extrusion process of a long billet and a simultaneous expansion and shrinkage of a long pipe will be detailed.

Forging disks or ring gears is a process that also has a relatively large aspect ratio and a large contact ratio.

The process parameters are as follows:

These two friction conditions are almost equivalent according to the evaluation curve in Fig. 2 of the first article. The finite element solutions were obtained using the AFDEX 2D forging simulator.

From the results displayed in Figure 1 and Figure 2, a big difference in plastic flow exists around the symmetric axis, indicating that the constant shear friction law reduces friction in the central region near the axis of symmetry while imposing excessive friction on the edge region, that us the boundary of the die-material interface. 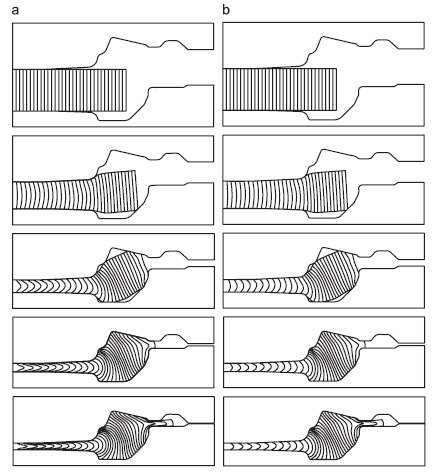 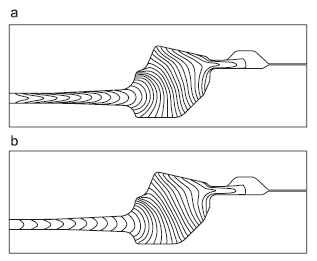 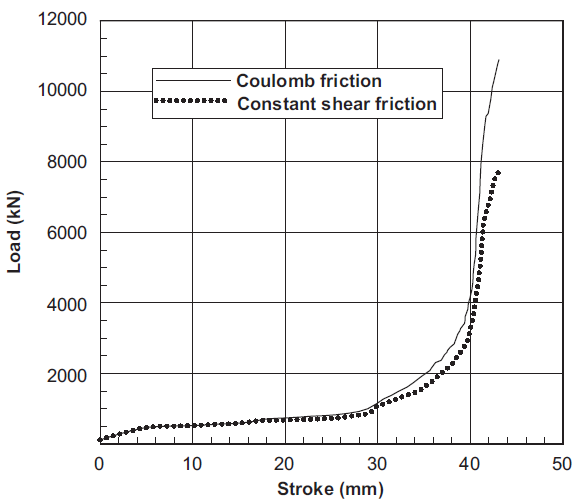 Friction is also a difficult problem when the contact ratio is large even though the aspect ratio is small. A typical example is the multi step extrusion shown in Fig. 4. 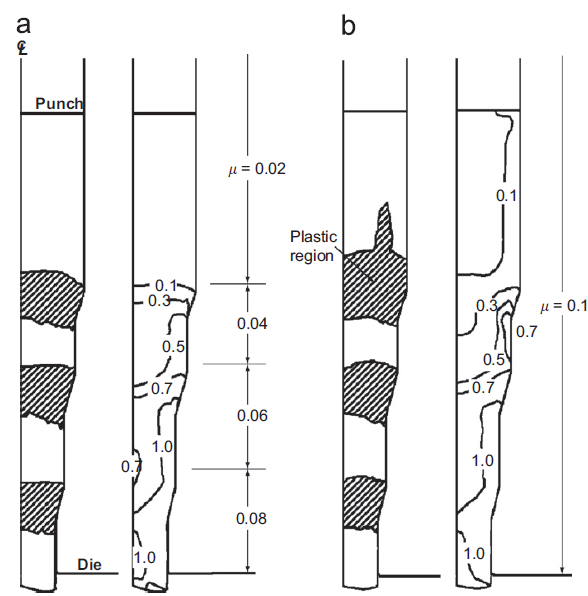 The flow stress of material used for this study is

The Coulomb friction coefficient was assumed to be 0.1. The finite element solutions were obtained using the AFDEX 2D forging simulator.

This phenomenon was caused by excessive friction resulting from the Coulomb friction law. To avoid this problem, dividing the contact region into several sub regions and assigning different friction coefficients to each sub region appropriate to the effective strain and/or pressure there is recommended. For example, the friction coefficient in the container is relatively small because the lubricant film is rarely damaged there.

As the material moves outward from the container, friction may increase due to the higher contact pressure or damage of the lubricant film. Yet such a problem does not occur when using the constant shear friction law. However, it is not realistic to assume that the frictional stress is constant along the entire contact region, and the inappropriate choice of the friction factor can cause an unrealistic forming load.

Simultaneous expansion and shrinkage of a long pipe

A simultaneous expansion and shrinkage of a long, thin pipe is very sensitive to friction laws because the normal stress along the die–material interface is relatively small while the contact surface is large. Therefore, the process shown in Fig. 5 is selected to study the effect of friction laws on the metal flow and the forming load in such a case. 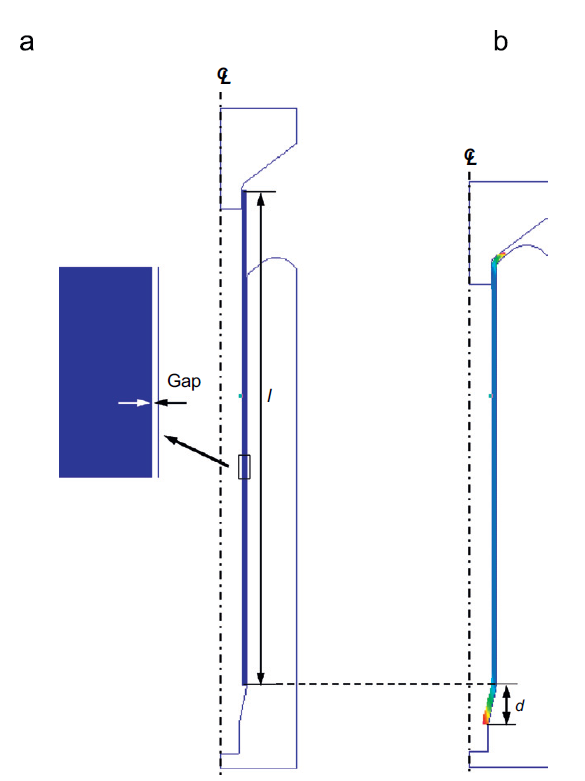 Figure 5: A long-pipe simultaneously shrinking and expanding process: (a) initial and (b) final.

In this process, the pipe ends are formed simultaneously; the upper side is expanded while the lower side is shrunk. If the friction is large, the middle region of the pipe will expand, and contact will take place. Because the contact region is large, the material should be influenced significantly by the friction laws and friction conditions. The finite element solutions were obtained using the AFDEX 2D forging simulator.

The flow stress of the material was 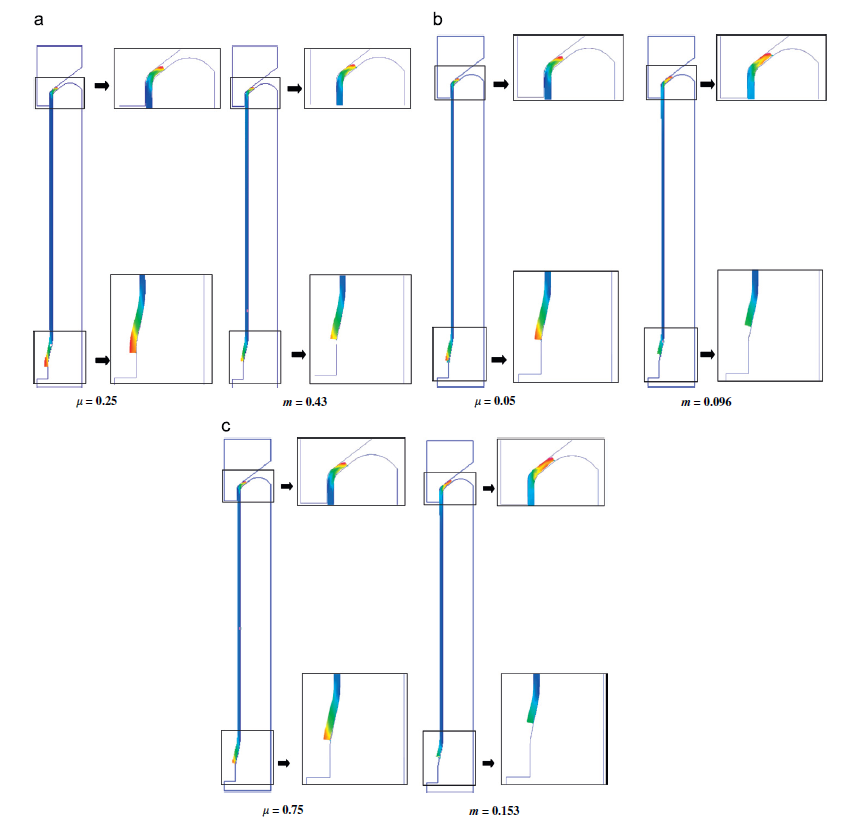 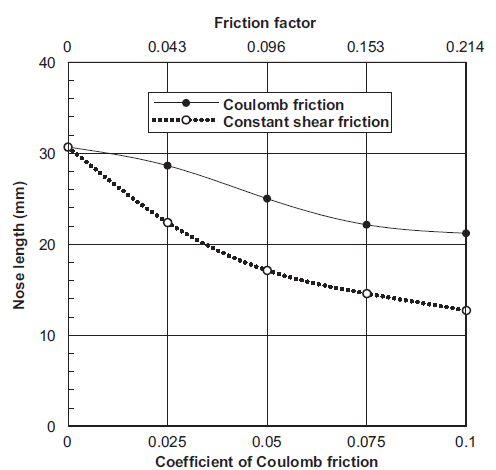 In this series of two articles, the effects of friction laws and friction conditions on finite element predictions in metal forming were investigated in detail. The similarities and differences between the Coulomb friction law and the constant shear friction law by comparing their related finite element solutions, which included upsetting processes with different aspect ratios, as well as friction-sensitive metal forming processes involving strip rolling, ring gear forging, multi step extrusion, and pipe shrinkage and expansion were studied.

Furthermore, predictions of forming loads in the hot forging of ring gear differ from each other by nearly 30% depending on which friction law is used. We also showed that an excessive Coulomb friction coefficient can cause an abnormal plastic region when it is applied to a multi step cold extrusion process. In that case, the Coulomb friction coefficient should be considered as a function of the strain and normal stress.

The simultaneous shrinkage and expansion at both ends of a long pipe was also analyzed and found that this process can be classified as one of the friction-sensitive metal forming processes. In this study, the importance of the friction laws and friction conditions in metal forming simulations, especially for friction-sensitive metal forming processes, which have aspect ratios that are larger or smaller than normally encountered, was emphasized.

Hope you like reading this article. If you find this useful, please do share it and spread the word.

Note: The series of two articles are a summary of the paper titled “Effect of friction laws on metal forming simulations” published on Tribology International 42 (2009) 311-319.